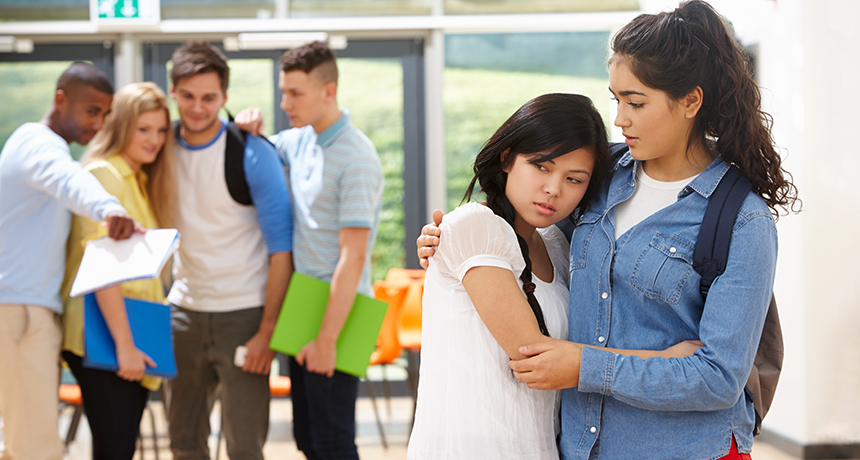 What makes a teen step in when they see bullying? Scientists asked almost 900 kids to find out.

Stopping a teen bully seems like it shouldn’t be complicated. In the movies, all it takes is a single act. Another teen just has to step up and say, “Hey, that’s not okay.” But in real life, it’s often not so simple to embrace our inner heroes. Friends may suddenly decide not to help. They may even worry about becoming the next victim. What makes a teen more likely to intervene when they witness bullying? A supportive school with trusted teachers and clear guidance from a kid’s family both help. That’s the finding of a new study.

People might think of bullying as one kid shoving another in the hallway. As the victims know, it can be far more than that.

Kelly Lynn Mulvey studies developmental psychology — how the mind develops and how people behave — at North Carolina State University in Raleigh. She describes bullying as “repeated forms of aggression.” It also tends to reflect “a power imbalance” between the bully and the victim. That aggression can be physical threats or attacks. Bullying also can be verbal or emotional, as one person tries to wield power over another. No matter what form bullying takes, someone gets hurt. It’s not just about the bullied kids, either. Unchecked bullying can hurt the bullies and those watching from the sidelines.

Kids often are told that they need to say something when they witness bullying, and also get a teacher or a parent. But much bullying takes place when adults aren’t around, Mulvey notes. Kids get bullied on the playground. Or on the bus. Bullying also happens online — where adults can’t see it at all.

“Because adults often are not there to observe it, we need the kids to be the ones to stand up and say it’s not okay,” Mulvey says. It sounds like a scary thing to do. But peer intervention really works. Speaking up and standing up to bullies tends to reduce the attacks, she says.

Heroes in the making

What might make a teen step in when bullying happens?To find out, Mulvey and her colleagues partnered with several schools in North Carolina. They gave online surveys to 896 sixth- and ninth-grade students. The survey took 40 minutes, but “we had a very high rate of participation,” Mulvey says. The students recognized what a problem bullying can be.

All read eight stories about kids bullying each other, either in person or online. For each story they answered a list of questions. Was the person who acted aggressively being a bully or not? Would it be a good idea for someone to step in and defend the victim? If the victim fought back, how okay would that be? The students also were asked how likely they would be to try and stop the bully, and if they would step in if the victim tried to retaliate.

But that wasn’t all. They scientists also asked students about their families and schools. The studentshad to say whether they had a lot of rules at home and how their parents reacted when they did things that were wrong. They were asked whether they liked their teachers and whether the teachers kept good discipline or treated some students better than others. The students also were asked about the social environment at school and if people there felt connected to each other.

A recipe for bravery

Girls, it turned out, were more likely than boys to say that any form of aggression was not okay. It didn’t matter if the bullying was physical, verbal or online. Girls also were more likely to think that someone should intervene to stop bullying. Older boys, in contrast, tended to think that physical aggression was okay, and said that they probably wouldn’t want to step in. 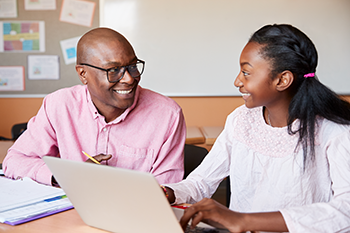 Students that said they had teachers they trusted were more likely to say they’d step in to stop a bully. monkeybusinessimages/iStockphoto

When it came to actually confronting a bully, sixth graders were more likely than ninth graders to say they would stand up to an aggressor. By ninth grade, Mulvey says, the teens were more concerned about what their friends would think of them. That means they might keep quiet.

Mulvey and her colleagues published their findings October 16, 2018, in the Journal of Youth and Adolescence.

From survey to school

“Communication is key,” Mulvey says. “We need to help kids feel comfortable communicating with their family as well as teachers.” If kids feel supported, she says, they will feel able to “speak up” and challenge bullies “when they see aggression happening.”

The findings also imply that anti-bullying efforts should not stop in middle school, Mulvey notes. There often is less emphasis on tackling bullying in high school. Yet her findings suggest that this is where kids may need help most.

Research has largely ignored how and whether teens intervene when bullies attack, notes Nicola Abbott. She’s a psychologist at University College London in England. Abbottbelieves “key for stopping bullying” is getting onlookers to challenge these attacks whenever they witness them.

But she understands why schools and teachers might hesitate to tell kids to step up. “There’s a bit of fear around encouraging your child to stand up,” she says. Schools and parents may worry that a kid who steps in could end up in a fight. Or that a teen’s efforts might backfire if the bully chooses the would-be hero as a new victim. But, Abbottsays, “there isn’t a great deal of evidence that is the case.” Instead, bystanders who step in often can stop a bad situation from getting worse.

Of course, it’s easier to say on a survey that you’d stand up to a bully than it is to be brave in real life. Mulvey and her colleagues are working with students now to find out who actually intervenes when a bully attacks. They also hope to figure out if the movies are right — that maybe a single hero can shut down a bully’s bad behavior.

Note: This article was updated on February 20, 2019, to correct a misspelling of Nicola Abbott.