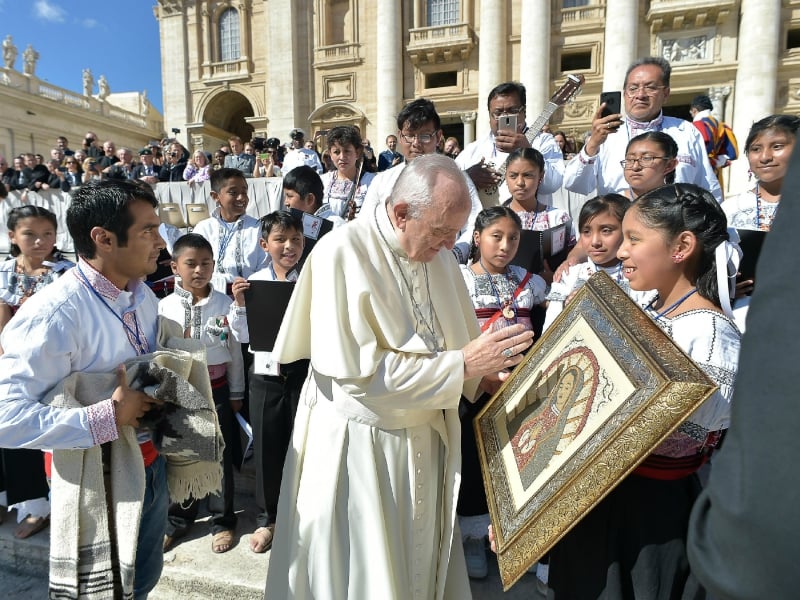 Pope Francis meets members of a children’s choir from Mexico during his weekly general audience in St. Peter’s Square at the Vatican on Sept. 20, 2017. The pontiff prayed for the victims of the 7.1-magnitude quake that hit Mexico on Tuesday, leaving several hundred dead, including children trapped under a collapsed school in Mexico City. (L’osservatore Romano/Pool Photo via AP) September 21, 2017 By Nicole Winfield ShareTweetShare

VATICAN CITY (AP) — Pope Francis on Thursday acknowledged the Catholic Church was “a bit late” in realizing the damage done by priests who rape and molest children, and said that the decades-long practice of moving pedophiles around rather than sanctioning them was to blame.

Francis met Thursday for the first time with his sex abuse advisory commission, a group of outside experts named in 2014 to advise him and the Catholic Church on best practices to keep pedophiles out of the priesthood and protect children.

In his prepared remarks, Francis promised to respond with the “firmest measures possible” against sex abusers. He said bishops and religious superiors bore “primary responsibility” for keeping their flocks safe from abusive priests and would be held accountable if they are negligent.

But Francis also spoke off-the-cuff, admitting that the church’s response to the scandal was slow. Indeed, the Vatican for decades turned a blind eye to the problem and local bishops, rather than defrocking abusers, instead moved them from parish to parish, allowing them to abuse anew.

Part of the problem was that under the papacy of St. John Paul II, the Vatican was reluctant to defrock young priests, even if they were abusers.

“The consciousness of the church arrived a bit late, and when the consciousness arrives late, the means to resolve the problem arrive late,” Francis said. “Perhaps the old practice of moving people around, and not confronting the problem, kept consciences asleep.”

Francis also addressed the way the Vatican was handling appeals of canonical sentences, saying he wanted to add more diocesan bishops to an appeals commission that is currently dominated by canon lawyers. He said lawyers “tend to want to lower sentences” and that he wanted the influence of diocesan bishops with experience of the problem in the field to balance it out.

“I decided to balance out this commission and also say that if abuse of a minor is proven, it’s sufficient and there’s no need for recourse. If there is proof, period. It’s definitive. Why? Not because of revulsion, but simply because the person who did this, man or woman, is sick. It’s a sickness.”

In its three years, the sex abuse commission has held educational workshops in dioceses around the world, but has faced such stiff resistance to some of its proposals at the Vatican that its most prominent member, Irish abuse survivor Marie Collins, resigned in frustration in March.

The commission’s statutes and membership are up for review, and it remains to be seen if survivors of abuse will be included in the new membership roster.

Cardinal Sean O’Malley, the archbishop of Boston and head of the commission, told the pope that the commission had “benefited greatly” from listening to survivors, but made no mention of whether any were under consideration for membership.

On the membership front, he said only that the commission was seeking “representatives from churches in different parts of the world.” Currently, priests, nuns and experts fill the ranks, including noted sociologists and psychologists in the field of abuse and child protection.