Is the Netflix show 13 Reasons Why linked to suicide?sign for yesterday

Is the Netflix show 13 Reasons Why linked to suicide?sign for yesterdayIt depends on who you ask, how they measure it — and even what season people watch 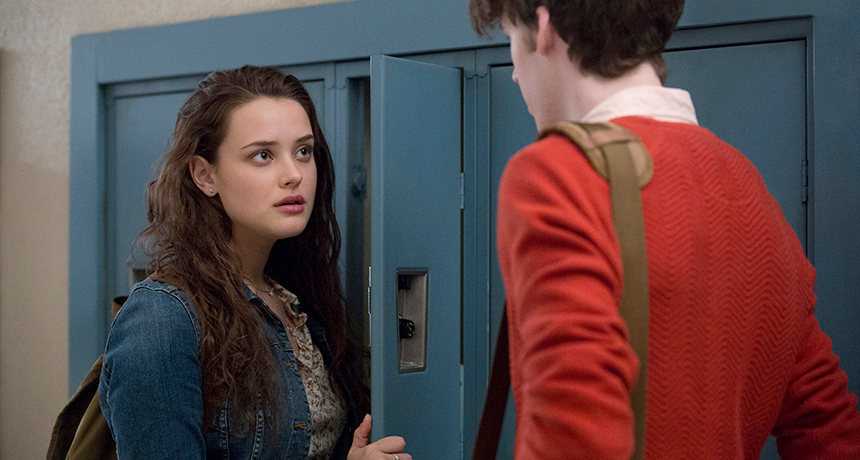 13 Reasons Why is a show about the suicide of Hannah Baker (left). Scientists and medical professionals worried that people who watched the show might be at higher risk for suicide themselves.

When the Netflix series 13 Reasons Why debuted on March 31, 2017, doctors and people who study teen mental health immediately began to worry. The show focuses on teen suicide. It also covers other intense topics, such as sexual harassment, assault and school shootings. Experts were concerned that watching the show might raise viewers’ risk of suicide. Now the results of two studies looking at the show’s effects on suicides have been released. Neither studycan prove the show increased or decreased youth suicides. But media should still cover tough topics with care, the scientists warn.

13 Reasons Why is based on a book with the same name by Jay Asher. It focuses on the suicide of a teen girl. The first season leads up to her suicide, which is shown in graphic detail. The show was immediately popular, and the first season was the third most-binged show on Netflix in 2017. A second season was released on May 18, 2018.

Lisa Horowitz and other scientists began to worry as soon as they heard about the show. Horowitz is a pediatric psychologist — someone who studies the thoughts and behaviors of children and teens. She works at the National Institute of Mental Health in Bethesda, Md. “I have to tell you, when I saw the trailer for the show … I was literally nauseous,” she says.

Horowitz was worried about suicide contagion. Research has shown that people may become more likely to show suicidal behavior after being exposed to suicide in their family, community or the media. Horowitz and her colleagues were therefore concerned that 13 Reasons Why might increase rates of teen suicide.

After the show aired, the researchers examined data that had been collected by the Centers for Disease Control and Prevention (CDC). This government agency tracks how and when people have died. The Horowitz team looked at how many people died by suicide between 2013 and the end of 2017. They divided those data into three age groups: 10 to 17, 18 to 29, and 30 to 64. Then, the scientists compared suicide rates before the show aired to those right around the time of its release.

In general, suicides increased over time. But for people over 18, there were no more suicides after the show aired than the scientists would have predicted. In contrast, there was a 29 percent increase in the suicide rate among 10- to 17-year-olds in April 2017. That was the month after the show came out. There also were more suicides among teens in March 2017, when the trailer for the show was spreading around the internet.

Overall, the researchers estimated that 195 more suicides occurred among 10- to 17-year-olds than would have been expected. And although the show focuses on the suicide of a teenage girl, the biggest increase occurred in teen boys. Horowitz and her colleagues published their results April 28 in the Journal of the American Academy of Child and Adolescent Psychiatry.

“Overall, it’s consistent with other research out there,” Patricia Ortiz said of the findings. She is a psychiatrist at George Washington University in Washington, D.C. However, she adds, the research does not prove that the show caused those extra deaths. That’s because there was only a correlation between an increase in suicides and the TV show. “We can’t prove these people [who committed suicide] saw the show or were exposed to it,” Ortiz explains. “Suicides are very rarely due to one thing. There are lots of factors.”

After mental-health professionals criticized Netflix for putting out the show in 2017, a message from the show’s cast was added to the beginning of each season. Each episode also has notes before it that warn viewers of potentially disturbing content. That notestresses that 13 Reasons Why addresses tough topics and encourages people to seek help if they need it. It also offers a website with resources to help.

Dan Romer is a psychologist at the University of Pennsylvania in Philadelphia. Like Horowitz, he also was very concerned about 13 Reasons Why. Instead of looking through death records, however, he and his colleagues decided to ask people who were watching the show how they were feeling.

They surveyed 729 people between the ages of 18 and 29. Each filled out surveys before and after watching the second season of the show. The second season — like the first — is pretty grim. “I couldn’t watch the whole thing,” Romer notes. “It’s just awful. Everything goes wrong all the time.” But the second season, at least, ends in a much more hopeful place than the first.

Romer found that people who watched some of the second season — but not all — were at a higher risk for suicide. They thought about it more often and were less hopeful about the future. But if people — especially students — watched the second season to the end, they had a lower risk of suicide. In fact, they had fewer suicidal thoughts than people who had never seen the show at all. Romer and his colleagues published their findings April 25 in the journal Social Science & Medicine.

The study “essentially found the opposite effect” from the first, says Kimberly O’Brien of Harvard Medical School in Cambridge, Mass. She’s a research scientist in the field of psychiatric social work. But this second study, too, found only a correlation. It doesn’t prove that watching the show leads to one feeling or another. Teens and young adults have many other stresses in their lives that might contribute to suicidal thoughts.

In a May 3 statement, a Netflix spokesperson said the network was aware of both studies and that they may be seen as contradicting each other. It also acknowledged that suicide is “a critically important topic and we have worked hard to ensure that we handle this sensitive issue responsibly.”

This is the warning note that viewers see now before viewing 13 Reasons Why on Netflix. Netflix/YouTube

Neither study can prove that 13 Reasons Why increased — or decreased — the risk for suicide. “We couldn’t prove it,” Horowitz says. Still, she says, “I think it needs to be a wakeup call.” That wakeup call is for the media to think about how they are depicting suicide and how it might affect teens and young adults. “We’re trying to decrease the suicide rate,” she notes. “We do not need something that’s increasing it.”

This means that the media — whether it’s Netflix (there will be a third season of 13 Reasons Why), people writing about the show or journalists writing about suicide in general — need to be careful about how they discuss suicide.

But that doesn’t mean no one should bring up the topic. It only means that people should do so carefully. “There’s a myth that if you talk to someone about suicide, you put the thought in their head,” says Horowitz. “That’s a myth. It’s not true.” The best way to help someone who might be at risk, she explains, is to talk to them about it.

Suicide is the second leading cause of death among young adults ages 15 to 29 as of 2016. If you or someone you know is suffering from suicidal thoughts, please seek help. In the United States, you can call the National Suicide Prevention Hotline, 1-800-273-TALK (8255). Or you can text 741-741. Please do not suffer in silence.

sign for yesterdayIs the Netflix show 13 Reasons Why linked to suicide?