Summary: Impaired motor function, such as that experienced by Parkinson’s patients, appears to influence the perception of art, researchers report.

Art appreciation is considered essential to human experience. While taste in art varies depending on the individual, cognitive neuroscience can provide clues about how viewing art affects our neural systems, and evaluate how these systems inform our valuation of art.

For instance, one study shows that viewing art activates motor areas, both in clear representations of movement, like Adam and Eve in Michelangelo’s Expulsion from Paradise, and in implied movement through brush strokes, like in Franz Kline’s gestural paintings.

Altered neural functioning, like that experienced in patients with Parkinson’s disease, changes the way art is both perceived and valued, according to a study published recently in The Journal of Cognitive Neuroscience by researchers from the Penn Center for Neuroaesthetics at the University Pennsylvania’s Perelman School of Medicine.

They found that people with neurological motor dysfunction demonstrated decreased experiences of motion in abstract art and enhanced preferences for high-motion art, compared to a healthy control group.

“People can experience movement in abstract art, even without implied movement, like brush strokes,” says author Anjan Chatterjee, MD, a professor of Neurology and director of the Penn Center for Neuroaesthetics.

“These representations of movement systematically affect people’s aesthetic evaluations, whether they are healthy individuals or people with Parkinson’s disease.”

People with Parkinson’s disease demonstrated stable and internally consistent preferences for abstract art, but their perception of movement in the paintings was diminished compared to controls.

This finding provides evidence that the brain’s motor system is involved in translating nonrepresentational information from static visual cues in the image into representations of movement.

Mondrian’s final Boogie-Woogie paintings, inspired by the New York jazz scene, are viewed as dynamic and rhythmic, despite an absence of gestural brushwork. The feeling of movement brought about by works like these likely results from the way these visual elements are interpreted, leading to abstract representations of movement rather than simulations of specific bodily actions.

Similarly, Pollock paintings may be felt as dynamic because the increasing number of overlapping colors and the manner of paint application leads to more repetition, curvature, and contrast, which are thought to evoke feelings of movement.

“Our findings are particularly significant because, previously, it was posited that viewing abstract art stimulated the motor system because people could envision the gestures the artist took when painting,” says lead author, Stacey Humphries, PhD, a postdoctoral researcher in the department of Neurology.

“But our research shows that even without those representations of movement, the motor system can interpret static visual clues as movement and in turn impact the viewer’s aesthetic appreciation.” 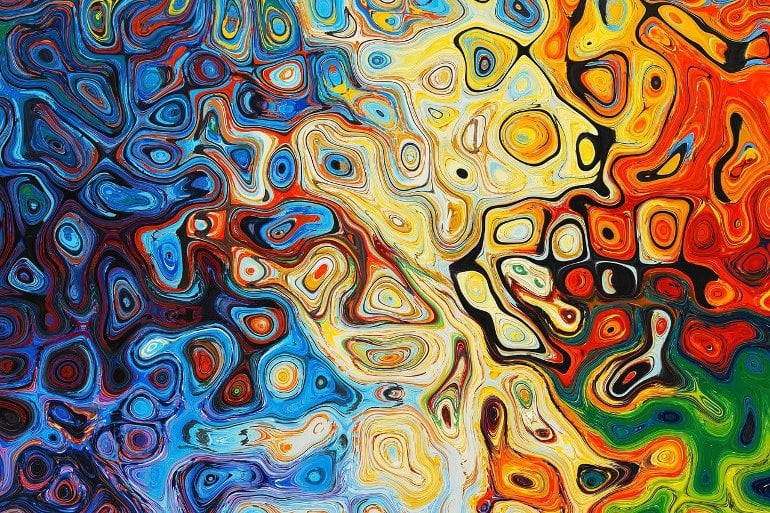 People with Parkinson’s disease demonstrated stable and internally consistent preferences for abstract art, but their perception of movement in the paintings was diminished compared to controls. Image is in the public domain

The motion effects cannot be attributed purely to greater complexity in the higher motion paintings. Researchers found no significant differences in the complexity ratings or the relationship between complexity and liking of art given by patients and controls.

The researchers note that the patients participated while on their usual medication. One factor not yet considered is the effect that dopaminergic medication might have on aesthetic experiences. Dopamine plays a significant role in the normal functioning of the brain’s reward system, which is consequently disturbed in Parkinson’s disease.

The fundamental insight of the study is that the brain’s ability to construct abstract representations of movement influences people’s aesthetic experiences of art.

Funding: This study was supported by the Smith Family Fund.