Denied admission because he’s black, civil rights leader urges Duke Divinity to confront its pastjuly 6 2021The Rev. Gil Caldwell attended Boston University’s School of Theology instead, and there met the Rev. Martin Luther King Jr., who inspired him to work for racial justice. 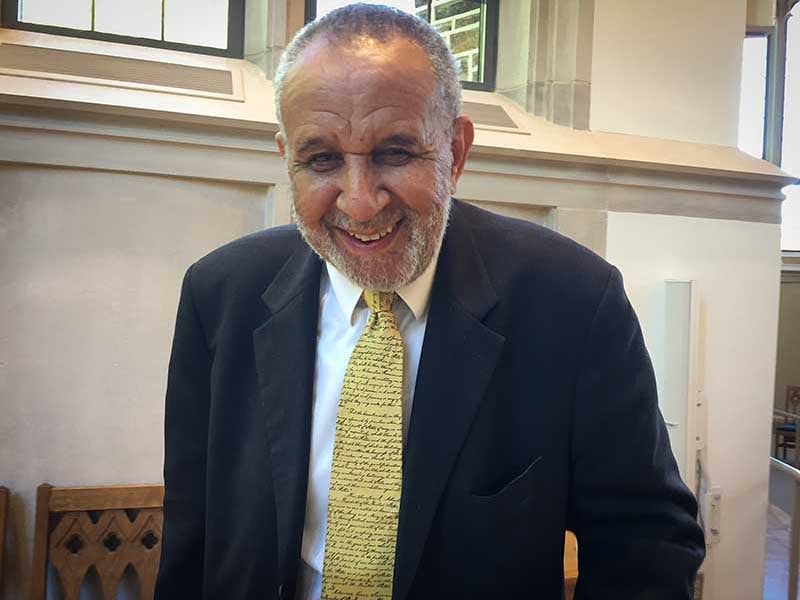 The Rev. Gil Caldwell spoke at Duke Divinity School on Oct. 18, 2017, 60 years after he was denied admission on account of his race. RNS photo by Yonat Shimron October 18, 2017 By Yonat Shimron ShareTweetShare

But the Rev. Gil Caldwell, best known as “a foot soldier” in the Rev. Martin Luther King Jr.’s army, is not about to retire his lifelong fight for racial justice.

When Duke Divinity School invited him to speak Wednesday (Oct. 18) during morning chapel services, he saw an opportunity to ask whether Duke was willing to confront its past.

More than 60 years ago, the divinity school denied him admission because he is black. Speaking at a service in Goodson Chapel, he asked: “What is it that God would have Duke Divinity School do in light of that history? For if one is not honest about that history, one can’t be fully present.”

Divinity School Dean Elaine Heath acknowledged that history in introducing Caldwell, saying the school wanted to “reckon with its inglorious past.” Later, over lunch, she, Caldwell and a group of Duke Divinity School students talked about racial healing.

Caldwell recounted that in the early 1950s, he was studying as an undergraduate at North Carolina A&T State University in Greensboro, about 50 miles to the west, when he felt a call to ministry.

Duke, which is affiliated with the United Methodist Church, seemed like a good fit for Caldwell, who is Methodist. But back in 1955, he told the students, the rejection letter he received said the trustees had not changed their policies on racial segregation.

“They hoped that I would find a seminary that would meet my needs,” he said, recalling the letter.

Caldwell attended Boston University’s School of Theology instead and there met the Rev. Martin Luther King Jr., who led him to a life protesting racial injustice. Caldwell marched alongside King to protest school segregation in Boston, to rally for jobs on the steps of the Lincoln Memorial in Washington in 1963 and to register black voters in the Selma to Montgomery, Ala., march in 1965. 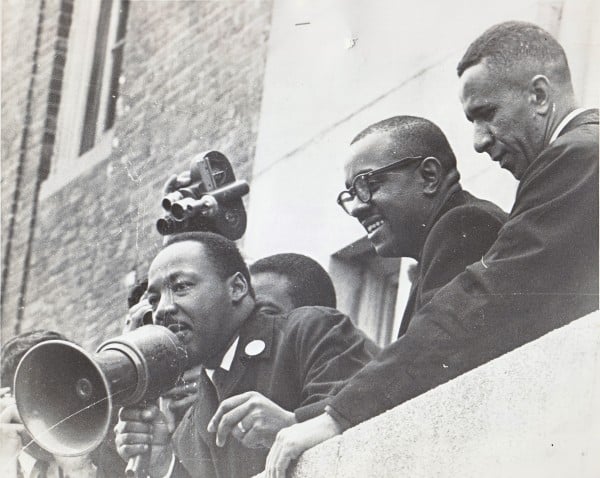 Left to right, the Rev. Martin Luther King Jr., the Rev. Virgil Wood and the Rev. Gil Caldwell at a school in the Roxbury section of Boston in April 1965. Photo courtesy of the Caldwell Family Collection

More recently, Caldwell has taken up the call for LGBTQ rights, championing full inclusion in the United Methodist Church, where he is a retired elder.

Caldwell is executive producer of the documentary “From Selma to Stonewall: Are We There Yet?,” which was to be screened Wednesday at a different Duke venue. The film follows Caldwell and LGBTQ activist Marilyn Bennett, who directed the movie, in an exploration of the similarities and differences between the black civil rights and LGBTQ rights movements.

“For me, he reflects a generation of clergy who have their pulse on the need for social justice,” said the Rev. Carl Kenney, an African-American graduate of Duke Divinity School, speaking of Caldwell.

Caldwell urged the school to do more by offering classes that explore the psychology behind racial and sexual injustice.

He recalled the story of Jesus meeting an invalid at a healing pool. When Jesus asked the man if he wanted to be healed, the man gave an excuse: “I have no one to help me into the pool.” (John 5:7) Jesus told him to “pick up his bed and walk.”

“I guess I ask the divinity school at this point: Are you willing to pick up your bed and walk?”