Family looks for answers after Christian boy beaten to death in Pakistanfebuary 23 zodiacA fellow student will face trial for kicking a 17-year-old boy to death — a crime committed out of hatred toward Christians, the dead teenager’s parents say. 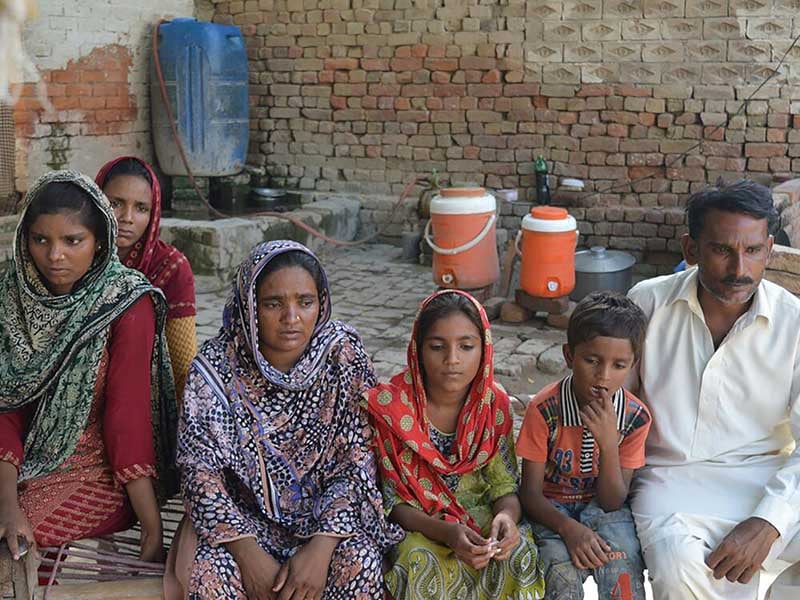 Family members of Sharoon Masih, a Christian high school student who was beaten to death on the third day of school in August in Pakistan. Photo courtesy of British Pakistani Christian Association October 20, 2017 By Amel Ghani ShareTweetShare

LAHORE, Pakistan (RNS) — On their son’s third day of high school, the parents of 17-year-old Sharoon Masih learned that he had been in a fight, had suffered a serious injury, and been taken to the hospital.

They rushed to the hospital and there found him dead.

“The boys from his class who had brought him there told us that he died in the classroom,” said his mother, Razia Bibi, a Christian woman in a predominantly Muslim country.

Police said that on Aug. 27 another student at the school — in Punjab, Pakistan’s most populous province — kicked Sharoon in the stomach and that he died of internal injuries. The student charged in his death now awaits trial, but police are not calling the attack a hate crime.

However, many Christian Pakistanis, who make up less than two percent of the country’s population, suspect the teenager was targeted because of his religion. Christians, they say, are often forced to occupy the lowest rungs of the social ladder, and are regularly discriminated against in education, employment and housing.

Advocates for Christians in Pakistan note that another Christian boy was killed violently this year: On Oct. 9, police killed a 14-year-old Christian boy in an incident still under investigation.

Pakistan is fourth on the list of 50 countries that the U.S.-based nonprofit Open Doors — which advocates for persecuted Christians — lists as the most difficult in which to be a Christian.

Christians, while one of the largest religious minorities in Pakistan, are far from the only group to suffer for their beliefs. The Ahmadiyya, who consider themselves Muslim but are widely labeled heretics, are forbidden by law from calling themselves Muslims, and have long been persecuted. Sunni Muslim extremists in his mostly Sunni country have launched lethal attacks against the Shiite minority.

Sharoon’s mother said the first day of school did not go smoothly for her son. He told her that other boys had teased him, warned him against drinking from a glass used by Muslim students, and called him “choora,” a Punjabi slur typically leveled at Christians. A teacher scolded him for not wearing the school uniform and made him stand outside of class.

Sharoon skipped school the second day to use money he had earned over the summer to buy a uniform. He returned to school the third day, was attacked, and died.

The Muslim student taken into police custody in the case said the violence was not motivated by religious differences. Sharoon, he told police, had angered him by breaking the screen on his mobile phone.

But his family is sure Sharoon is dead because he is Christian.

The word “choora” — which Sharoon’s family said his schoolmates had used to taunt him — connotes someone who has dark skin, comes from a low economic class and does “dirty” work for a living, such as cleaning bathrooms.

Asif Aqeel, a Pakistani journalist and advocate for the rights of religious minorities, said discrimination against Christians is so blatant that some government advertisements for janitorial jobs state that only non-Muslims should apply. Aqeel said that a disproportionate number of Christians work as cleaners in government offices.

Elaine Alam, secretary general at Formation Awareness and Community Empowerment, a group that works throughout Pakistan to bolster the rights of women, minorities and young people, said that, sadly, Pakistani Christians often expect to be called “choora.”

“The term ‘choora’ has been accepted by the average Christian mindset. They have accepted it as a title, from which common Pakistanis will know them or call them,” she said.

But Jawaid Tahir Majeed, the equivalent of the police commissioner in the region in which the teenager died, said police have interviewed 34 other Christian boys from the school and none have complained of discrimination.

“Most of the time the religion of these boys was not discussed in school and they did not know who was Christian and who was Muslim,” he said.

Aqeel said it is possible there was no hate crime, but questions remain. “Why did the boy beat Sharoon up so much? What flared the anger?” he asked.

Sharoon’s parents say they just want to know what happened to their oldest son and why no one saved him.

Sharoon wanted to be a lawyer, said his paternal uncle, Liaquat Masih. “We had already arranged for him to start as an apprentice at a lawyer’s office and study law after he completed high school,” he said.

He added that Sharoon’s father has stopped sending his six other children to school because he does not feel they will be safe.