Scott Morrison has said he is “devastated” by failing to deliver the religious discrimination legislation but declared he would rather lay down the attempt than see the protections compromised.

He confirmed the legislation is dead for this term – the government will not attempt to revisit it in budget week.

The Prime Minister abandoned the package, which also involved change to the sex discrimination act, after five Liberal defectors combined with Labor and crossbenchers to amend it in the House of Representatives to protect transgender students at religious schools.

The five – Trent Zimmerman, Dave Sharma, Fiona Martin, Katie Allen, and Bridget Archer – acted despite strong pressure from Morrison and have come under attack from some colleagues.

Morrison on Sunday attended St Maroun’s Maronite Church in Adelaide to say he was “devastated” by the result and explain his refusal to compromise .

He said much of his passion for seeking to protect Australians of religious faith from discrimination was based in his deep appreciation of the Maronite community and many of the eastern Orthodox faiths.

Many in these communities had known persecution at home and come to Australia seeking religious freedom.

“That freedom is here. But we sought to add to those protections and we were unsuccessful. And that is a bitter disappointment,” he said.

But he did not regret bringing the legislation forward.

He said it was disappointing this bid to provide more protections “was undermined by those who would seek to undermine the very religious institutions upon which so much of Christian community depends”, including schools and charitable organisations.

Morrison said he’d had to make a very important decision about the legislation, and in doing so “I felt very much like the woman before Solomon”.

According to the biblical story two women had babies, one of whom was smothered when the mother rolled on it during the night. The mother of the dead child put it next to the other woman, and took the living one.

When the women went before Solomon each claiming to be the mother of the living child, he proposed cutting the baby in half.

“And the woman whose child it was said, no, the other woman can have my child. And at that moment, Solomon knew who the mother was,” Morrison said.

“So, I would rather lay down our attempt to secure those additional protections, than see them compromised or undermined.

“And I’m sure that communities of faith all around this country, you all understand that.

“I share your disappointment, but I have not forgotten upon which everything else rests, and that is not something that I would forsake.

“So there will be those who will say that I have been humiliated and all of those things. But [I am] happy to suffer those things in a cause that I believe strongly in and that I know you share. We will see where this goes in the future.” 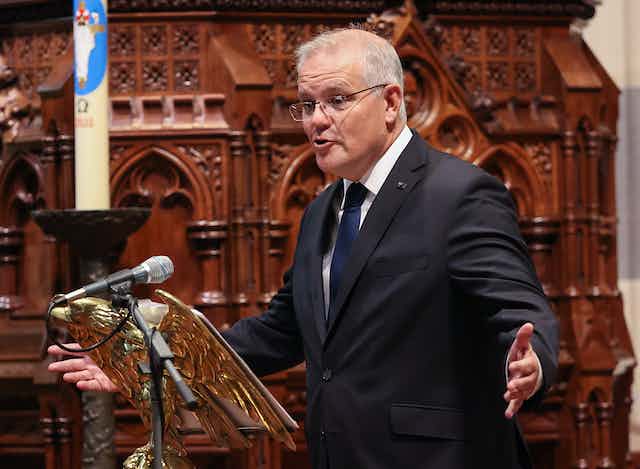