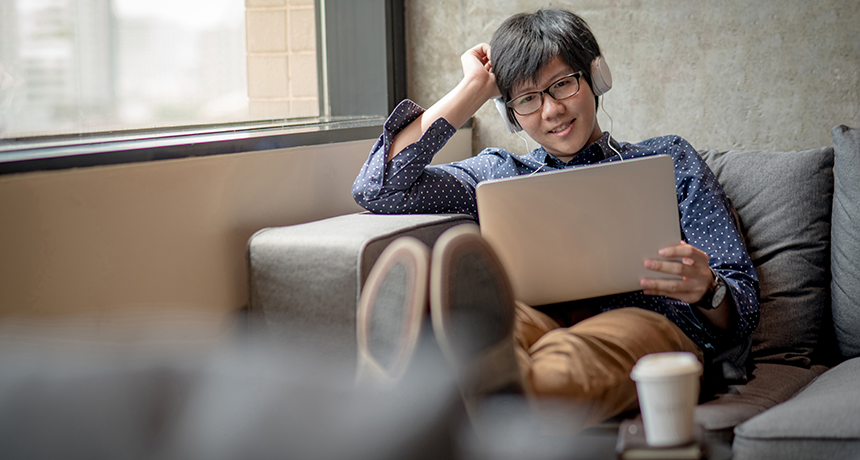 A survey of teens finds signs that spending a moderate amount of time with technology may boost happiness.

It seems like everyone is staring at a screen these days. Computers, televisions and smartphones are everywhere. Some researchers have worried that there might be downside to that. Investigating this has proven hard. But a recent study may help better understand how this technology affects our well-being.

Andrew Przybylski is a psychologist in England at the University of Oxford. Netta Weinstein is psychologist at Cardiff University in Wales. The pair wanted to find out if screen time is good or bad for people. So they surveyed 120,000 15 year-olds in the United Kingdom. The survey asked the teens about their life satisfaction and happiness over the last two weeks. Teens considered statements like: “I’ve been feeling optimistic about the future” and chose from the following answers: “none of the time, rarely, some of the time, often, all of the time.”

The researchers presented their findings earlier this year in Psychological Science.

Przybylski and Weinstein compared the teens’ mental well-being to how many hours they used various types of technology. These were television, computers, video games and smartphones. 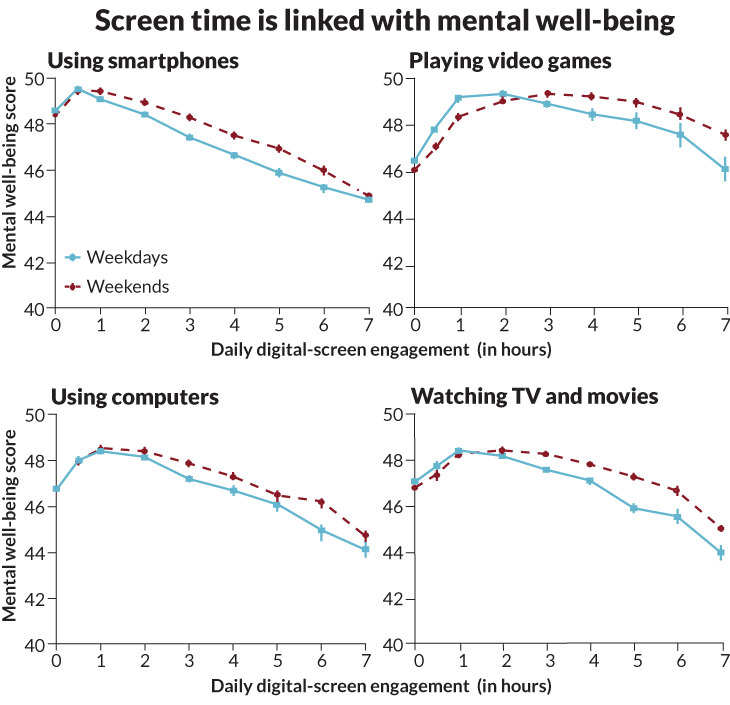 A survey of 120,000 British teenagers showed that two indicators of mental health — happiness and life satisfaction — seem to shift according to total daily use of digital media. Overall scores averaged from 40 to 50, with 70 as the highest score possible. Each type of digital media had a different “sweet spot” where the benefits were greatest.T. TIBBITTS; Source: A.K. Przybylski and N. Weinstein/Psychological Science 2017

The data, graphed above, seem to show that moderate use of digital devices correlates with improved mental well-being. That doesn’t mean that excessive use of the devices might not be bad. Clearly, the researchers suggest, this subject is worth studying more.

Digital media consumption is probably changing people in some way. However, the direct impact may never be totally clear.

One day, research may indeed turn up a link between technology use and impaired mental health. But scientists still would not necessarily know why, Przybylski told Science News. For example, it might turn out that poorer mental health was due to screen time taking the place of other beneficial activities. What type? Perhaps taking the place of sports or meeting up to hang out with friends. So the actual time spent with digital media may not matter so much what the teens were not doing instead.

That’s one reason these issues are hard to study: So many aspects of people’s daily lives, and technology, have been changing so quickly.

Look up the difference between correlation and causation. Now explain whether the relationship between use of digital technology and mental well-being is correlational or causal.

Analyze This! explores science through data, graphs, visualizations and more. Have a comment or a suggestion for a future post? Send an email to sns@sciencenews.org.