Summary: Early life experiences may affect neural wiring patterns that can lead to the development of ASD, schizophrenia, and epilepsy later in life, a new study reports.

A new study of brain development in mice shortly after birth may provide insights into how early life events can affect wiring patterns in the brain that manifest as disease later in life – specifically such disorders as schizophrenia, epilepsy, and autism.

Researchers focused on two types of brain cells that have been linked to adult neurological disorders: neurons in a modulating system nestled deep in the brain and other neurons in the cortex, the brain’s outermost layer, that counteract excitation in other cells using inhibitory effects. The modulating cells send long-range cables to the cortex to remotely influence cortical cell activity.

The study is the first to show that these two types of cells communicate very early in brain development. A chemical released from the modulating cells initiates the branching, or arborization, of axons, the long, slender extensions of nerve cell bodies that transmit messages, on the cortical cells – and that arborization dictates how effective the cells in the cortex are at doing their job.

Though there is still a lot to learn about the impact of this cellular interaction in the postnatal brain, the researchers said the study opens the door to a better understanding of how neurological diseases in adults may relate to early-life events.

“It’s known that abnormal early-life experiences can impact kids’ future sensation and behavior. This finding may help explain that kind of mechanism,” said Hiroki Taniguchi, associate professor of pathology in The Ohio State University College of Medicine and senior author of the study.

“This study provides new insight into brain development and brain pathology. It’s possible that during development, depending on animals’ experiences, this modulating system activity can be changed and, accordingly, the cortical circuit wiring can be changed.”

Taniguchi completed the work with co-authors André Steinecke and McLean Bolton while he was an investigator at the Max Planck Florida Institute for Neuroscience.

The research is published today in the journal Science Advances.

The study involved chandelier cells, a type of inhibitory neurons in the cortical section of the brain, and neurons of the cholinergic system – one of the systems that monitor the environment and the internal state, and send signals to the rest of the brain to trigger memory and appropriate behaviors.

“Both of these types of cells have been separately studied in the context of adult functions or modulations so far. The developmental role of cholinergic neurons in the brain wiring remains poorly understood,” Taniguchi said.

Chandelier cells are named for the spray of signal-transmitting synapses (called synaptic cartridges) at the branch terminals that resemble candles of a traditional chandelier, a pattern that gives them inhibitory control over hundreds of cells at a time.

“These cells have output control,” said Steinecke, first author of the study who is now working at Neuway Pharma in Germany. “Chandelier cells can put a brake on excitatory cells and tell them they’re not ready to fire. As inhibitory cells, chandelier cells are thought to regulate waves of firing – which is important, because the waves contain information that is transmitted over large distances of the brain.”

Previous post-mortem studies have shown that the synaptic terminals located at the end of chandelier cell axons appear to be reduced in the brains of patients with schizophrenia.

“This axonal ‘arbor’ being reduced suggests they don’t make as many connections to downstream targets, and the connections themselves are also altered and don’t work that well,” Steinecke said.

The team used two techniques to observe chandelier cells during early-life brain development in mice: genetically targeting and using a dye to label and detect cells that differentiate into chandelier cells, and transplanting genetically manipulated cells back into animals shortly after birth.

“This enabled us to watch brain development as it happens and manipulate conditions to test what the mechanisms are,” Taniguchi said. 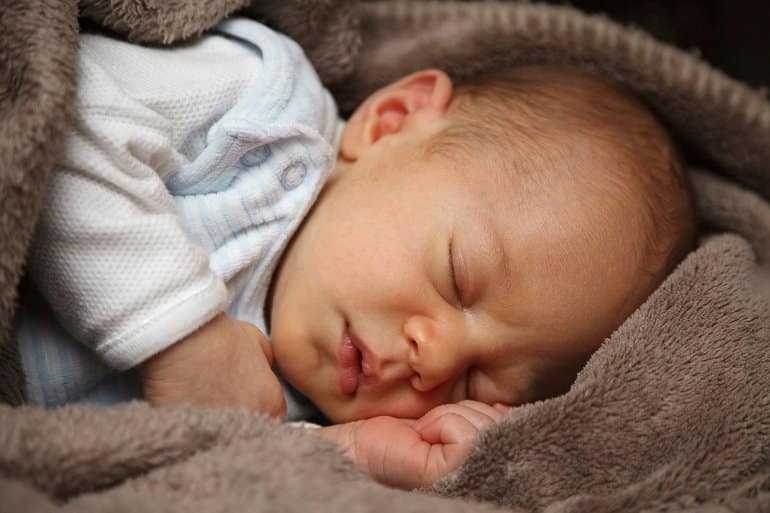 Researchers studying the postnatal brain found that the neurotransmitter acetylcholine released from cholinergic system cells initiates the branching, or arborization, of axons on chandelier cells in the cortex – and that arborization dictates how effective chandelier cells are at doing their job of using inhibitory effects to counter excitation in other cells. The study is the first to show that these two types of cells, both implicated in such disorders as schizophrenia, epilepsy and autism, communicate very early in brain development. Image is in the public domain

The researchers first observed how chandelier cell axons develop their branching structures, noting that small protrusions emerging from axons were the first signs that branches would sprout. And they identified the chemical needed to start that sprouting process – the neurotransmitter acetylcholine, which is released by cholinergic system cells.

The interaction between the distant cell types was confirmed through a series of experiments: Knocking out receptors that bind to acetylcholine and decreasing activity of cholinergic neurons lessened branch development, and making cholinergic neurons more likely to fire led to more widespread branching.

“The key is that we didn’t previously know how neuromodulatory systems regulate the cortical circuits – and both of them have been implicated in brain diseases,” Taniguchi said. “Now that we’ve found that cholinergic neurons could remotely impact cortical circuit development, especially cortical inhibitory signals, the question is what kind of environment or emotional state of change can impact cortical inhibitors’ development? We may want to see if we can find a link as a next step.”

Funding: This work was supported by funding from the Max Planck Society and the Brain Behavior and Research Foundation.