21 boys who died in Islamic school fire buried in Malaysiadec 19th signThe pre-dawn blaze Thursday at a three-story ‘tahfiz’ school, where Muslim boys study and memorize the Quran, blocked the lone exit from the dormitory, trapping students behind barred windows. 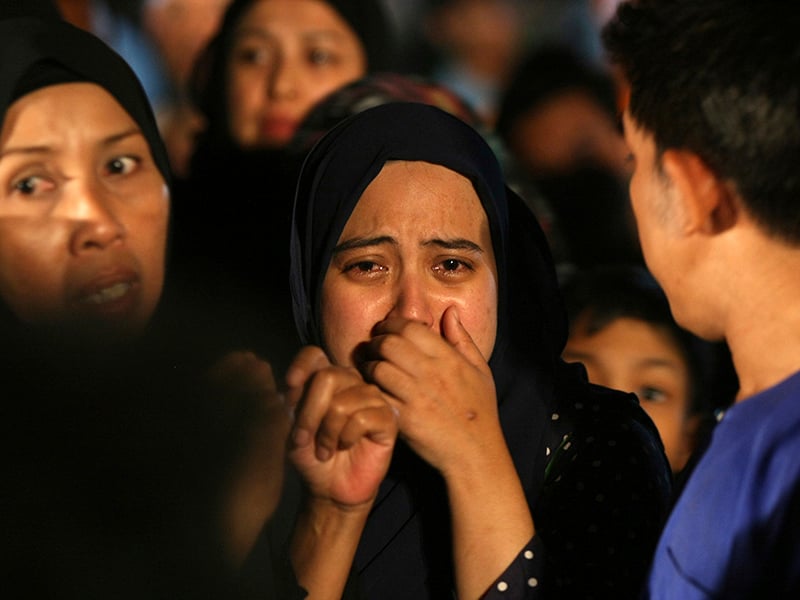 Relatives cry during a mass funeral for victims of a school fire outside of Kuala Lumpur, Malaysia, on Sept. 15, 2017. Officials said that the private Islamic boarding school was operating without a fire safety permit and license and that a dividing wall was illegally built on the top floor that blocked the victims from a second exit. (AP Photo/Daniel Chan) September 16, 2017 By Jerome Socolovsky ShareTweetShare

KUALA LUMPUR, Malaysia (AP) — Twenty-one young boys who died in a fire at a private Islamic boarding school were buried in Malaysia on Friday (Sept. 22) amid renewed calls for better regulation of religious schools.

The charred bodies were released to family members after being identified through DNA testing. Islamic authorities and grieving family members held prayers for the victims at the hospital mosque before the bodies were taken to cemeteries.

Eleven of the boys were buried outside Kuala Lumpur, where hundreds of relatives and well-wishers mourned as the bodies, wrapped in white shrouds, were lowered into the graves. In another cemetery about a half-hour away, two siblings and their cousin were laid to rest in the same grave, the Star newspaper said. Others were taken to their hometowns. State Islamic authorities sponsored and arranged the burials.

The pre-dawn blaze Thursday at a three-story “tahfiz” school, where Muslim boys study and memorize the Quran, blocked the lone exit from the dormitory, trapping students behind barred windows. Officials said that the school was operating without a fire safety permit and license and that a dividing wall was illegally built on the top floor that blocked the victims from a second exit.

A list released by the national news agency Bernama said the victims were 21 boys aged between 6 and 16 and two teachers. Police had put the boys’ ages at between 13 and 17 on Thursday and couldn’t be reached to explain the discrepancy.

Religious schools, mostly privately run, are not supervised by the Education Ministry because they come under the purview of state religious authorities. Local media reported there are more than 500 registered tahfiz schools nationwide but many more are believed to be unregistered.

Data from the Fire Department showed that 1,083 fires struck religious schools in the past two years, of which 211 were burned to the ground. The worst disaster occurred in 1989 when 27 female students at an Islamic school in Kedah state died when fire gutted the school and eight wooden hostels.

Deputy Education Minister P. Kamalanathan said his department has proposed that a special committee be set up to obtain state government consent to place all tahfiz schools under the ministry’s supervision to ensure they get safety approvals and have operating permits. He said the ministry had previously urged religious schools to register, but that was on a voluntary basis.

“This is a good opportunity for us to make it a compulsory requirement for religious schools to register with the Education Ministry. Our main concern is safety,” he told The Associated Press. “We have no intention to change or interfere with their teachings.”

Religion is a sensitive matter in Malaysia, where ethnic Malay Muslims make up about 60 percent of the country’s 31 million people.

Firefighters and witnesses have described scenes of horror — first of boys screaming for help behind barred windows as neighbors watched helplessly, and later of burned bodies huddled in corners of the room. Officials initially said they suspected the fire was caused by an electrical short-circuit but later said this wasn’t the case. Police said they are still investigating the cause as well as the presence of two gas tanks outside the dormitory.

School principal Mohamad Zahid Mahmod has told local media the students were being housed in a temporary building because of renovation work at the main school building. He said they were due to move back at the end of this month. He said the school has been operating for 15 years and registered with the state Islamic religious council. But an official with the state religious council said it had no record of the school.

Many grieving parents and family members described the tragedy as fate.

Siti Hasmah Mohamad Ali, the wife of former Prime Minister Mahathir Mohamad, blamed human error. She said she was briefed by a police officer and was told the dormitory was overcrowded.

“We say that it is God or fate but God does not err … the ugly and the bad are from us. We have to take that responsibility. Do not say it was God or fate,” she said after visiting the school Friday.