This Rosh Hashanah, a passionate call to actionoctober gemini horoscope 2021

This Rosh Hashanah, a passionate call to actionoctober gemini horoscope 2021To many of the nation’s rabbis, most of whom opposed President Trump in the general election and skew liberal on social issues, the Republican administration’s actions have been deeply disturbing. T’ruah rabbis from across the U.S. gather to pray outside an Immigration and Customs Enforcement detention facility in Richmond, Calif., on Aug. 22, 2017. Photo courtesy of Truah: The Rabbinic Call for Human Rights September 18, 2017 By Yonat Shimron ShareTweetShare

(RNS) —  As Jews gather in synagogues to mark Rosh Hashanah, the Jewish New Year, they will hear the blast of the shofar or ram’s horn, a mournful shriek intended to wake them up.

This year, that wake-up call may be louder than usual.

Rabbis have always seen their High Holy Day sermons as an opportunity to deliver a potent and impassioned plea during the year’s most sacred season and at a time when sanctuaries are filled to capacity.

But this year rabbis across the spectrum say they feel a particular urgency to rouse their congregants to action. In the nine months since President Trump took office, the Muslim travel ban, the attempted repeal of the Affordable Care Act, the rescinding of the Deferred Action on Childhood Arrivals, or DACA, program and most especially the anti-Semitic Charlottesville, Va., protest have forced many congregational leaders to rethink the rules.

“It’s clear to almost every rabbi in this country across the movements that you can’t be neutral. You have to take a side,” said Rabbi Jill Jacobs, executive director of T’ruah: The Rabbinic Call for Human Rights. “There’s no way to hide from the issues this year.”

To many of the nation’s rabbis, most of whom opposed Trump in the general election and skew liberal on social issues, the Republican administration’s actions have been deeply disturbing. So much so, that a group of Reform rabbis meeting in a closed Facebook page drafted a joint sermon they expect will be used by hundreds of rabbis on Rosh Hashanah, which begins Wednesday evening (Sept. 20).

Written by Rabbis Elka Abrahamson and Judy Shanks, the sermon makes reference to the staccato sounds of the shofar blasts as it takes on Trump, without naming him directly:

“We decry the unchecked rise of malevolent forces and the moral abdication of the President who fuels rather than heals hatred and division in our beloved country,” the sermon reads. “We, like the prophets before us, deliver a stern warning against complacency and an impassioned call for action. We ask you to rise up and say in thousands of ways, every day, as proud Jews and proud Americans: “You cannot dehumanize, degrade and stigmatize whole categories of people in this nation.”

That so many rabbis feel called to take a strong stand may in part be due to to the specter of Neo-Nazis marching in the streets of Charlottesville — an event rabbis described as “shocking” and “bone-chilling.”

But it also follows a year in which Jewish clergy have stepped up their activism on a range of issues:

In February, dozens of rabbis were arrested for refusing to disperse outside the Trump International Hotel in New York City over objections to the travel ban.Some 65 Jewish synagogues declared themselves “sanctuary” congregations willing to take in undocumented immigrants at risk of deportation.And Jews, and rabbis in particular, came out in force for Al Sharpton’s Thousand Minister March for Justice in Washington last month.

“I’m finding nationally within the rabbinic movement and locally with colleagues from all faiths, including many who have not been involved in social justice, that now is the time we cannot be silent,” said Rabbi Lucy Dinner of Temple Beth Or in Raleigh, N.C., who chairs the national Reform movement’s Committee on Peace, Justice and Civil Rights. 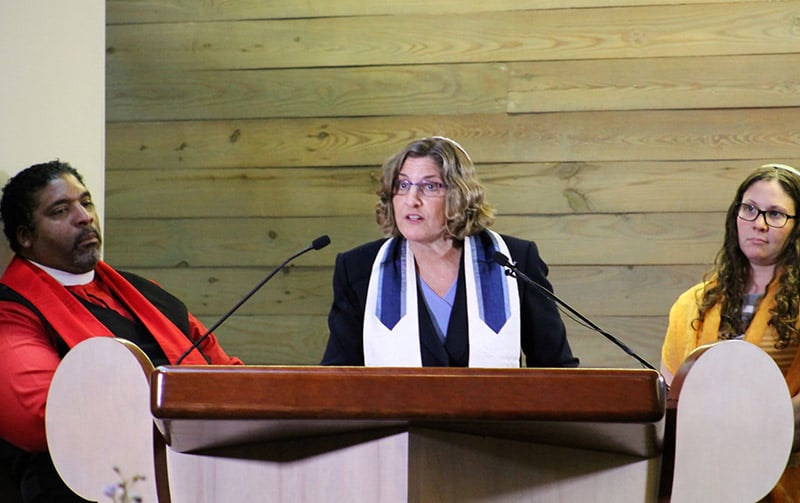 Rabbi Lucy Dinner speaks about voting rights and racial justice on the bimah at Temple Beth Or in Raleigh, N.C., while the Rev. William J. Barber and Rabbi Leah Citrin join her on stage. Photo courtesy of Religious Action Center of Reform Judaism

But while three-quarters of the U.S. Jewish population align with the Democratic Party, nearly a quarter, or 24 percent, voted Republican in 2016, according to exit polls — the majority of them Orthodox Jews, who skew conservative. And even in the more liberal Reform, Conservative and Reconstructionist congregations, there are handfuls of Trump supporters.

So in addition to the social action, this year also saw the debate over whether rabbis should get involved in social justice — or politics more generally — spill out into the open.

For many members of Reform Jewish congregations, who make up the largest of the U.S. Jewish movements, with 2 million people in 900 congregations, the answer is an emphatic “yes.” Many Reform Jews view social justice as the glue that binds them to their faith. “Tikkun olam” in Hebrew, or “repairing the world,” is what animates their Jewish identity.

For other Jews (and some in the Reform movement, too), tradition, ritual, beliefs, heritage and culture are the portals through which they water their faith.

But since few congregations are monolithic, that creates tensions. Three families left Congregation B’nai Israel in Sacramento, Calif., a Reform synagogue — two of those families after it voted to become a sanctuary congregation. And a member of Temple Beth El in Riverside, Calif., also a Reform synagogue, rebuked the rabbi after a sermon supporting the state’s Proposition 47, which reduced penalties for some crimes, saying, “I don’t come to services to hear this kind of thing.” (He is still a member.)

To be sure, rabbis generally avoid political endorsements and many say they speak out about issues, not parties. But even advocacy in support of social justice causes can seem polarizing, said Brad Hirschfield, an Orthodox rabbi and the president of CLAL –The National Jewish Center for Learning and Leadership, a New York-based think tank and consulting organization committed to religious pluralism.

“The problem is we stand in a position of power — the pulpit — and with the best of intentions pontificate about what social justice must translate into,” Hirschfield said. “That may necessarily exclude lots of people who may share your concerns as a rabbi but not necessarily your politics about it.”

Hirschfield said rabbis should beware of “quoting ourselves and using God for footnotes.”

“The Jewish tradition is deep and wide,” he said. “And while it may not include every political conclusion, it surely includes a wider range than most people are led to believe by whatever communal leader they’re sitting in front of on Rosh Hashanah and Yom Kippur.”

Congregants in Orthodox synagogues, which make up about 10 percent of the estimated 5.3 million U.S. Jewish population, are unlikely to hear the clarion call to resist the policies of the current administration on Rosh Hashanah. These Jews tend to identify as Republicans and take conservative positions on social issues such as homosexuality, women’s rights, Muslims and the Israeli-Palestinian conflict. 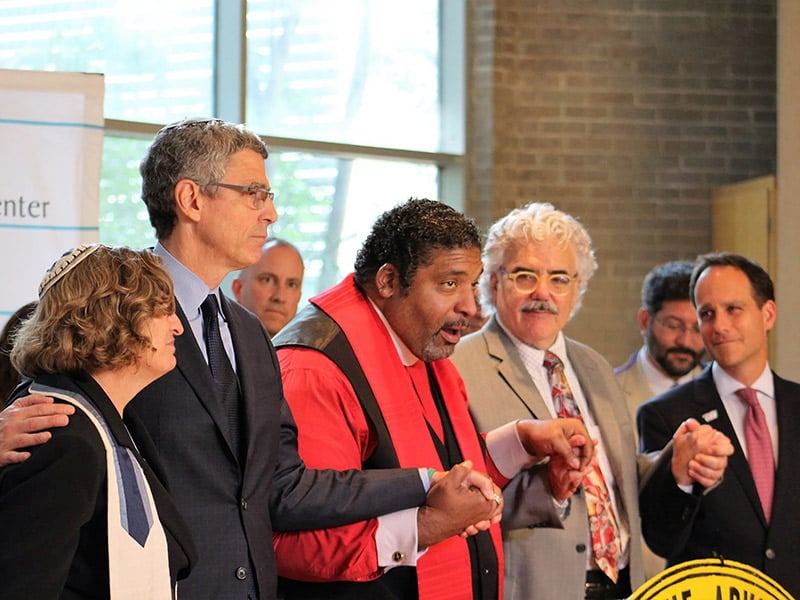 This community looks inward, tries to follow halakhah, or Jewish law, and keeps the Sabbath and dietary laws.

“The community has been very disengaged from universalistic concerns,” said Rabbi Shmuly Yanklowitz, an Orthodox rabbi and founder of Uri L’Tzedek, a movement that advocates for social justice.

Ovadia said he waited a week after Charlottesville to talk about the need to counter anti-Semitism, and even then, he did not mention the president’s equivocating response. (Trump said there were “very fine people” on both sides of the protest, a characterization he repeated this past week.)

“If I talk about social issues and they feel I’m preaching to them contrary to their opinion, they’ll say, ‘He’s manipulating us or telling us what to do,’” Ovadia said.

For the most part, that’s not a problem for Rabbi Suzanne Singer of Riverside’s Temple Beth El, a Reform synagogue. She plans on speaking about social justice in two of her four High Holy Day sermons.

Singer has a few Trump supporters in her congregation, but most members have been more interested this year in countering the president’s policies, by collecting household items for refugees, teaching them English and teaming up with Reform California, a project of the Religious Action Center of Reform Judaism that champions bills in the state Legislature that reflect Jewish values.

“We have a priestly and a prophetic role,” said Singer. “The priestly role is to make sure you’re there for people in times of need. But there’s also a prophetic role: We can’t accept what’s going on. Are we waking up to this or not?”